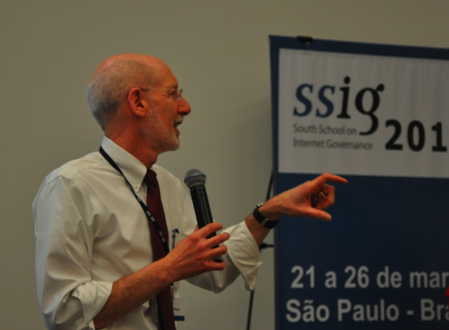 The history of the Internet reveals that we end to underestimate the traffic and the number of people connected. The demand is exceeding the most optimistic predictions. This is also the case of the mobile Internet.

Connectivity and communications is something that is as essential as water, transportation as a traditional infrastructure of society. Broadband is essential for society.

We are looking at real traffic and projecting the next five years - our forecasts are available on the net. Consumer traffic is overtaking business and video is what is driving this demand. When we look at consumer traffic, in two years the consumers will be using half of resources with video, which will go much beyond television: can be iChat, Skype, super high def virtual presence over high speed networks, facebook, youtube, ambient video - people with cameras always on to watch what's going on at home: mypet.com is a huge user of traffic. 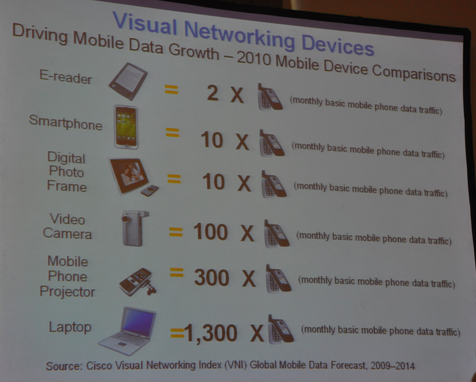 As a baseline, if we use the basic mobile phone data traffic today, an ereader like kindle uses twice as much data. The average smart phone uses 10 times more - this is the information from the image above.

When we think of devices such as the forthcoming iPad and other slate devices to arrive, we can see why we believe that the traffic across mobile networks will be driven by video but not necessarily television.

In Japan, we project that mobile data traffic will increase exponentially. 50% of the mobile traffic by 2014 will be data in new devices.

The Internet of things is becoming real. First, the theory is becoming reality. Smart grid and smart buildings, along with sensor networks for highways and roads or agriculture are examples. The smart dust is spread across fields to know how much moisture there is and whether plants need to be irrigated. There are all types of sensor networks being embedded and distirbuted globally - we are at a tipping point for the network of things and devices, along with cloud computing and huge data centers. 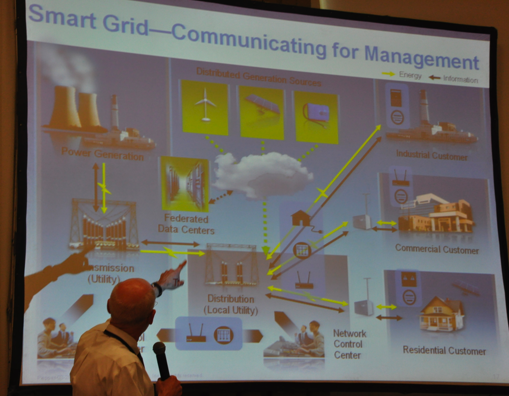 Smart grid: traditionally, in electric distribution networks the yellow line is energy and the black line is information. At peak hours when electric grids need more energy the cars that would be recharging would instead become a battery for the grid. In the US, consumers can manage the electric consumption being measured in our devices, such as smart refrigerators.

The language for this grid must be the internet protocol and not a siloed proprietary system: we need a global common language. One of the misconceptions on IP is that it is not secure - these are those who do not understand the Internet. The IP is a protocol that is and can be secure.

Part of the conversation of this Internet of things is about why should it be IP and this is a question about governance.

Buildings. A huge portion of electric consumption globally is in commercial buildings. There are many systems that do not talk to each other. 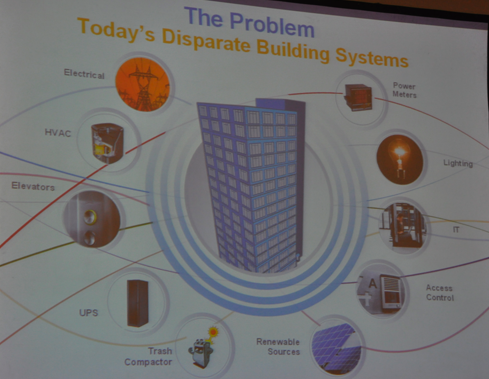 For more efficiency, these systems should talk to each other.

Now, everything is being more connected with more things. More devices. Sensor networks. We are moving to a world with connections of billions of things.

Demi raised the question of IPv6 - until this year I would have said that in fact the technology exists but there would be no demand.

One year ago there was a need to create a ecosystem for IPv6. Now, we see the global demand for networked devices and people growing. It is growing rapidly. IPv6 deplyoment is taking place. This is not top-down. It goes back to Dave Clark and John Postel or Barlow: it is bottom up. This is the culture of the Internet and it is happening now. As a result, this year Pepper believes that the capability will be there with devices and applications - we will need the duo stack for an indefinite period but the IPv6 is here.

We are beginning to see in the business case customers saying that they want it. This is the year where we have the tipping point with the adoption curve going up.

The question is: Are we looking at a false start where things start to go up but do not sustain? With a fragmentation? We cannot afford fragmentation for the health of the internet and social reasons.

When we talk about broadband it is a one-dimensional discussion. It is all about speed. What about latency, jitter, symetry, bursting, mobility? The characteristics of the connection make a difference. Because novel applications are not created equal. Networks can support the applications that are running over these networks and the applications can change for every user. 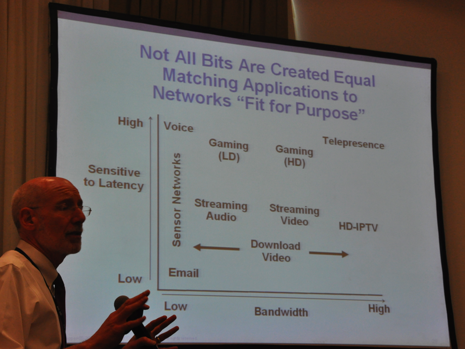 What are the applications that can wait and which ones are urgent?

The most stress high application in the slide above is telepresence. We need now networks that are flexible to meet specific needs at any given moment.

In one year the shift in peak-to-average ration jumped from 1.36 to 1.44 - we see more burstiness in network utilization and this is not predictable.

In an era of minority rule, 18 terabytes per month on 50 million consumers watching 50 youtube videos per month is the same as 4 million consumers downloading 2 hd movies per month. How do you address non-linear growth in terms of explosion on the demand side of networks? What is appropriate network management?

We need to think on the context of what is appropriate and differentiated services. We need application fit for purpose networks like the case of a meeting taking place in Washington and Singapore where we need to have prioritization in an effective way which is pro consumer, pro competition and also increases investment and innovation in networks.

There is innovation on the edge and in the core: this is a false choice. We have to invest on the entire ecosystem, it is both.

What are the implications of this to IG? First, we all recognize the importance of open internet. User driven content is exploding. In the US last month more time spent on facebook than on google. Nobody predicted that - 4 years ago Facebook did not exist. 10 years ago, who cared about broadband? There was no killer app visualized at that time. Facebook at the end of the day is people connecting to other people.

User generated content is along with social networking the development of applications on the internet. Video applications are another example. There are many reasons why the Internet development in a open standard is important to have the right balance in networks for applications. The problem is that not every government in the world supports the open internet.

We are talking here about the importance of a multistakeholder process. Traditional processes do not allow civil society and business to have a seat at the table and this changed with WSIS/IGF. It has been a great process so far, unseen anywhere else in the world. But not all governments are comfortable with this.

One of the recurrent issues is about the existing process and how they are not perfect. But they are working.

Comment by Pascal G. Bekono on March 25, 2010 at 6:06pm
Hi Seiiti, thanks for sharing this note. The presentation of Mr Pepper is interesting. I have some question: first, How to secure IP like electric distribution network as you reported?