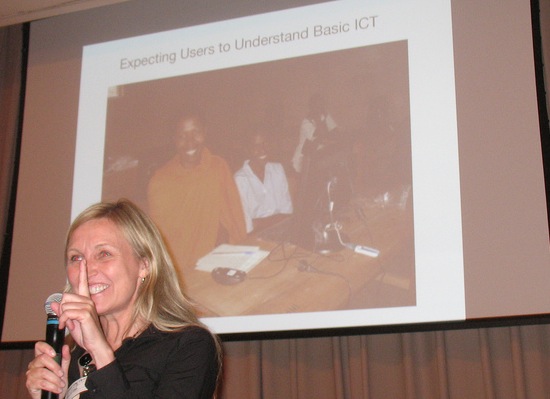 In witnessing and celebrating the acknowledgement of failure for several ICT4D organizations at Fail Faire DC 2011, attendees were able to reflect on several recurring themes that prevent success in the field. Among these, the theme of “getting to know the end user” appeared to be most prevalent. As proven by the Fail Faire presentations, failure to fully understand the end user can create serious problems for ICT4D solution implementation and sustainability.

While considering every stakeholder is vital to success in ICT4D projects, the end user is almost always the most important to factor. Determining an effective and sustainable technology solution is a fated failure if the actors intended for its use are unable to adopt it. With this in mind, special considerations should always be made for ensuring that a project is workable for the end users. In any project design, technology is the easy part; accommodating people is the factor that makes solution design challenging.

Represented in Fail Faire presentations by Inveneo, MoTech, and Llamadas Heladas, three major issues related to a lack of consideration for the end user are fleshed out below.

When an end user does not understand how to use a system, it becomes effectively impossible for them to do so. This means that ICT4D practitioners should be conducting surveys on end user technology knowledge prior to solution design to determine the extent to which solutions should be simplified along with the extent to which training should be provided. In many cases, it is appropriate to assume that end users will have no prior knowledge on the use of technology.

During Inveneo’s Fail Faire presentation, Kristin Peterson and Wayan Vota shared a picture of a student situated in front of a newly installed desktop. Upon taking a closer look at this photo, the audience could see that the mouse at the workstation was upside down. The photo represented an overestimation of end user knowledge. In such cases, training needs to be broken down to the very simplest and seemingly intuitive aspects of use in order to make the technology accessible to the end users.

Implementing technology in the developing world represents a significant shift in the way local individuals carry out their current work. Preemptively assuming that users will take to a solution without understanding their needs and wishes often leads to lack of complete adoption. Encouragement and incentive should be provided, along with extensive support after implementation, in order to help end users understand the benefits a solution can provide. In such times, organizations should also be analyzing the viability and fit of their solution to determine if changes should be made.

This idea could be seen Allison Stone’s presentation for MOTECH on the complications of an mHealth project in Northern Ghana. In their proposed solution, nurses would enter medical data pertaining to patient clinical visits into mobile phones. The information would then be sent to MOTECH servers and stored with patient healthcare information, allowing the generation of reports that would otherwise take days to write out by hand.

One of the largest challenges with this project was nurse adoption of the application. Most nurses did not see the advantage of adopting the system and actually viewed it as extra work. Stone reported that complaints of thumb cramps from entering data into the phones replaced complaints of hand cramps from writing out reports.

Since it took a while to aggregate enough data to make reports meaningful, the effectiveness of the solution could not be seen immediately, discouraging the majority of the nurses for taking the time to enter the data. A great deal of encouragement was needed to shift the existing work culture to one that made use of the new solution. In the end, a hand-written aspect of the project, that did not make use of technology, seemed to be most widely accepted and useful to the nurses.

In order to encourage end users to make use of a solution, it has to meet their needs and wishes. Making this possible almost always requires an element of participatory design, where users themselves are involved in the design of a technology solution.

While presenting on Llamadas Heladas, a project that set up mobile call shops across Nicaragua, Brain Forde warned the audience to address all customer needs, claiming that ICT4D practitioners should be designing solutions for a “fancy New York customer.” When his project attempted to expand the availability of the call shops by biking telephony across Nicaragua, his team found that the solution failed to address certain user concerns.

The bike call shops became an amusement, and onlookers would stare as they passed by. While this generated publicity for the shops, individuals did not want to make private phone calls with everyone else looking on. The original phone cabins provided this privacy and turned out to be a much better solution for telephony throughout Nicaragua.

Making considerations for the end user is undoubtedly one of the most important factors to success in ICT4D. From initial project planning to incentivizing technology use to offering user training, the end user should be considered in every aspect of project design and implementation in order to ensure that projects address needs and are workable for the people that will be most greatly affected.

Comment by Sammy Gatere on November 1, 2011 at 11:06am
Robert, that was a good read. I like the emphasis on the very key issue " the end user" which also informs us that ICT4D projects cannot easily be replicated just because they worked one community they may fail in another with the exact same resources. Knowing the end user helps build a sustainable and relevant ICT4D project.