New study: Towards a secure cyberspace via regional co-operation

With the increasing use of the Internet in everyday life and especially in global business, traditional crimes such as fraud, identity theft, and buying illegal goods are now also being conducted through the Internet as well. Black markets on the ‘dark web’, cyber-weapons, malware, and exploits are proliferating.

Trust is increasingly under focus following the Snowden revelations, and more recently, the Apple-FBI case. These developments have put the issue of trust under increasing strain, as institutions and the industry grapple to regain users’ trust.

New Diplo Alumni Hub: supporting the work of our Alumni

DiploFoundation is proud to announce a new initiative aimed at supporting the work of its alumni, in recognition of their achievements.

The new Alumni Hub, at www.diplomacy.edu/alumni, will feature articles, events, webinars, alumni dissertations, research, and other updates and announcements, related to Diplo’s alumni.

The 4th issue of the IGF Daily is out! The IGF Daily brings you updates from the 10th Internet Governance Forum (IGF), taking place in Joao Pessoa this week. 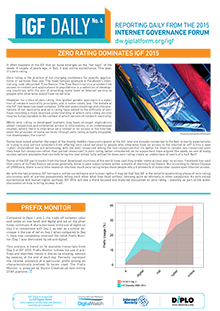 The highlights of Issue #4 include:

• a commentary on net neutrality and zero rating, and how this has become the 'hot topic' of IGF 2015;
• reports from sessions, and an interview with Internet…

Invitation for Diplo alumni and friends:

Diplo is organising the traditional get-together for Diplo alumni and friends, at the 10th Internet Governance Forum in Joao Pessoa, today Thursday 12th November at 17.45 (local time). We would love to meet you and touch base! Join us at the Diplo booth if you're participating in the IGF in person.

Please share this message with Diplo alumni and friends.

Looking forward to seeing you,

DiploFoundation and the Internet Society have teamed up to provide just-in-time reporting from the IGF, which will complement the dynamic updates offered through GIP Digital Watch.

The first three issues of the IGF Daily are out!

Issue #1 includes report excerpts from the ISOC Annual Event and…

Discussions on privacy, freedom of expression and cybersecurity were at the forefront during the Global Conference on Cyber Space held earlier this month. In the US, tougher legislation is being introduced to combat cyberattacks, while intelligence officials are hinting at 'front door' access to encrypted data. The US FCC has filed its new rules with…

The UN Human Rights Council has just adopted a resolution appointing a new UN Special Rapporteur on the Right to Privacy, elevating the importance of this right. In Asia, the Manila Principles of Intermediary Liability were launched. Developments on the copyright reform, Digital Single Market, and net neutrality are moving at a fast pace in Europe,…

February is an important month for Net Neutrality, as the FCC prepares to vote for new proposals. Cybersecurity is also at the forefront, as banks are once again a target for hackers, while new proposals for government and private sector cooperation unfold in the USA. What impact will these developments - any many others - have on the global digital…

The NETmundial meeting and the IANA transition process dominated most of the 2014 developments, bringing Internet governance (IG) to a crossroads. 2015 will be a decisive year in which stakeholders will agree on post-2015 agendas. What can we…

Colleagues, here goes Diplo's call for applications for the upcoming Introduction to Internet Governance course, which kick-starts on 16 February. The 10-week course introduces IG policy and covers main issues, including Infrastructure and Standardisation, Legal, Economic, Sociocultural, and Development aspects, and a section on IG processes and actors.

Details below, and at…

Dear colleagues,
We are coming to the end of a very busy 2014 and the beginning of 2015, which promises to be even more eventful. At this time of reflection, we have prepared a visual 2014 Timeline of Internet Governance.

To add your own input to the analyses of the year,…
Continue

The three-week ITU Plenipotentiary Conference 2014, which came to a conclusion earlier this month in Busan, reviewed the ITU’s Internet-related resolutions. It also decided the ITU’s work plan for the next four years, and elected its new leadership. Join…

Colleagues, you may recall the IG building, which has served us well as an IG awareness- building tool over the last 10 years. It was sketched 10 years ago during one of the long WGIG meetings. The building reflected the Internet of 2004 when, for example, Twitter did not exist and social media was just emerging. How different should the new 2014 IG building be? Should it be more solid and sophisticated?…

Countdown to the Geneva Internet Conference

The Geneva Internet Conference is just a few days away. It will take place next week on 18-19 November, with a pre-event on 17 November. If you have not registered yet, please do so at your earliest convenience at…

DiploFoundation is currently accepting applications for the 2015 Master's programme in Contemporary Diplomacy, with a specialisation in Internet governance.

This specialised programme, offered by DiploFoundation and the University of Malta, gives current and future Internet policymakers a solid foundation in diplomatic skills and techniques, necessary to engage effectively in international and global policy processes. Graduates of Diplo's Internet governance courses hold key…

[Webinar] Evidence and measurement in IG: What sort of data and numbers are we talking about?

Although the Internet is an engineering artefact, we have very little data relevant for Internet Governance (IG). In cybersecurity, for example, we are still in doubt about the number of threats and the size of the losses incurred. The same applies in other IG fields. Without understanding the scope of the problem, it is difficult to discuss possible…

Friends, Diplo's call for applications for the thematic course on Cybersecurity closes in a few days. The course details are below and at http://www.diplomacy.edu/courses/IGCBP-Adv-security. If you would like to apply but need an extension, please let us know at ig@diplomacy.edu

Day 4 of the 9th IGF in Istanbul

It’s over. The 9th IGF has come to a close and by now, most of Diplo’s team are back home or en route. It’s been a very full week with lots of interesting sessions, engaging discussions, and fruitful meetings. Old friendships were renewed and new friendships forged.

Diplo had one workshop on Friday (…

Day 3 of the 9th IGF in Istanbul

As the ninth meeting of the IGF continues to debate the issues around Internet governance in Istanbul this week, elsewhere in the city, the Internet Ungovernance Forum is also holding forth. This initiative is organised by Prof. Yaman Akdeniz from Bilgi Unversity, who, in his keynote speech opening the event…