Ups and Downs of URL Shorthening

As you twitt, you quickly learn about bit.ly, tinyurl.com and other URL Shorthening services to make your long URLs suitable to mobile phone. Perfect! Excellent idea! However it only works while service is available. And it may stop being available overnight. Ponder that. Are we coming to "quick in - quick out" internet service?

I suppose the Founders of the Internet are neither Natives, nor Migrants, but just that, Founders.

BUT.... what about those of us who are not "Digital Natives" because the Internet wasn't even a dream when we were born. BUT we are not "Digital Migrants" either, because we didn't "move into" the… Continue

Thank you, Mr. Chairman, for giving me an opportunity of contributing to the Internet Governance Forum in a capacity of academia. As many previous speakers addressed, IGF has done a
tremendous job of… Continue

The Internet Governance Forum: what does it mean for Africa? (research article)

SUMMARY OF THE ARTICLE

This article seeks to understand the representation and interest of the IGF process within the African ICT community, and to give illustrations of its eventual impact. To do this, we, primarily, have analyzed exchanges on two key discussion lists on which African views on… Continue

Various issues were raised such as dealing with material that is still under copyright and those to which copyright no longer applies as well as organisations doing their own projects such as Google and their digitizing of books project.

Panel of experts from Arab states and UNESCO among others discussed various issues and provided examples of initiatives in countries like Egypt and India. A new way to deal with access to publications and payment was mentioned. Some initiatives such… Continue 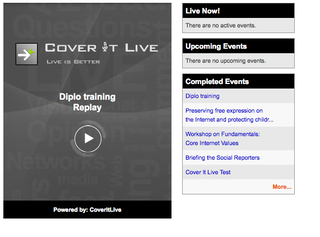 Some of us at IGF2009 have been making use of the CoverItLive live blogging platform to capture some of the sessions that have taken place.

I can't embed the archive of content directly into Ning, but you can find an archive of all our live blogging… Continue

This is reposted from an original on the Practical Participation blog.

Since the key role of young people as leaders was written into the WSIS Geneva declaration, there has been some level of involvement of young people in the Internet Governance…

Workshop 96 : The Association for Progressive Communications (APC) in partners with the Council of Europe and UNECE has come up with a draft code of Practice on Information, Participation and transparency on Internet Governance. The document is available for your comments and suggestions. having attended this session and being part of the group for discussions, I think, this was a very good initiative done by the partners. The document to me was more focused on participations which is effective… Continue 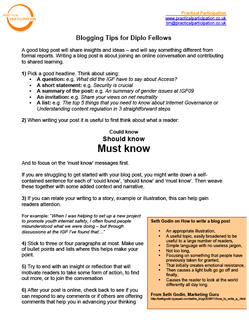 There are many different ways of using a blog. A blog is a blank canvas until you start to write upon it.

When you think about how to blog, it is useful to think about how you want to use the platform that a blog provides. It is a platform to share ideas, publish content, and to create conversations: after all, comments from readers are as important… Continue

Highlight at the session on governance of social media

During the session on governance of social media, it was debated for a title for a workshop which will address on how to develop terms of service for social media and event which will be attended by civil society, governemnt, private sector.

Presentations sought to address how to continue the development of ICTs in light of global economic situation. It was acknowledged that continued investment was necessary. Egyptian Ministry of Communications highlighted how their continuous development has assisted their growth and development in ICT sector. Contribution to GDP was given as well as overall growth within a year. Egypt plans to continue to be a major player as a transit point (many of the cables go through the Red Sea) between… Continue

Overview provided of IPv6 versus IPv4 and some of the "myths" associated with IPv6 such as that it improves security (NOT TRUE!) and it improves routing scalability (also, NOT TRUE!)
Example (real experience) of co.za and the application and allocation of IPv6 in southern Africa provided by a small ISP.
Results from ALCATEL-LUCENT survey conducted on behalf of EU presented. Survey was conducted in Europe, Middle East and Central Asia. Indicates that only European orgs. "ahead of the… Continue

Highlights at the Main Session on Access and Diversity, IGF4 16th November

"Develop One internet to speak many languages"

This workshop focused on steps that were either being considered or should be considered by various stakeholders in the current global economic climate. An interesting presentation by the OECD highlighted some issues such as current policies in the ICT industry, priority areas for some organizations and green ICTs. It was shown that there is a disparity between Northern and Southern Europe in terms of priority areas for ICT investment. It was also mentioned that there is a new wave of ICT… Continue

This workshop was primarily an information session about Internet Exchange Points in the various regions worldwide; their roles and various sub-committees/bodies.

Those attending were able to find out about latest developments in various regions e.g. in LACNIC (Latin American and Caribbean Region - 3 new IXPs launched in past year - Haiti, and Netherlands Antilles (St. Maarten, Curacao); Re-instatement of IXP in Africa on September 11, 2009)

Benefits of having these IXPs… Continue

(Please note that I arrived late!!)

The session had presentations from the main players in ccTLD processes globally. Examples of processes and initiatives were given from a European standpoint among others. IANA's role was briefly discussed. There was an interesting explanation of Anycast by Bill Woodcock, the history of Anycast and why it is used. Some main points:

Thoughts from Workshop 230- Youth and Internet Governance: the way forward

We are a generation that depends so much on the Internet. Many of us cannot live without it (just like electricity :) ). BUT do we know what is involved when it comes to Internet usage? Is there a difference between one's life online and offline? What information should or should I not put on a social network site like Facebook? The list goes on and on.