We have good and bad news. Since most of us do not like the bad news, let us go through that first: 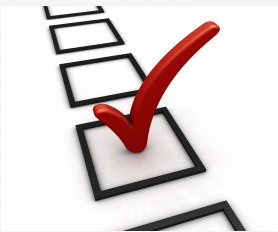 More than one hundred and eighty Internet governance experts from all over the globe are part of the IGF Impact Survey. Are you one… Continue

New technologies, new challenges. Identity theft is one of major problems in Cybercrime apart from child pornography. When someone steals your credit card information and have access to your bank account is one serious problem. But as our digital identity gets "real" on modern internet which increasingly represents real people then your digital identity is also threatened. What if your facebook, twiteer or blog account gets stolen? It is not as yet considered your ID and not protected as yet as… Continue

I think these people have a point here, it is ultimately an advertisement, but note the stats provided....

EuroDig - results of the online survey

A youth group has created a blog to present their perspectives on the European Dialogue on Internet Governance 2009 - EuroDig. They made an interesting survey involving 17 countries and the report is available here:… 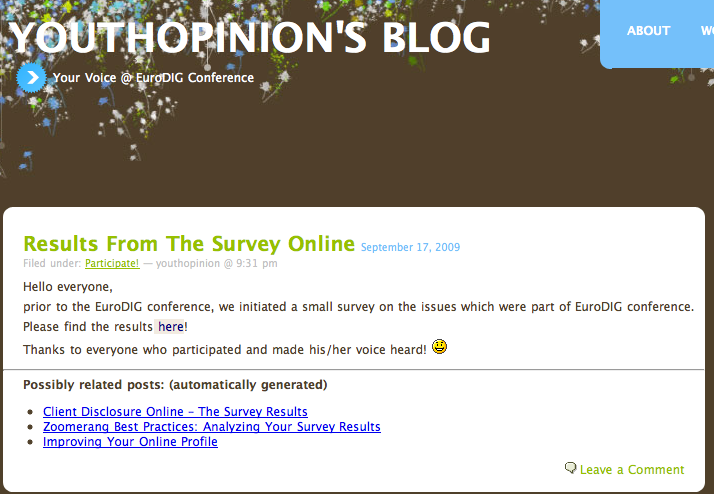 US IGF: how to get involved

Are you ready to participate in the forthcoming US IGF taking place on 02 October (Friday) at the Center for Strategic and International Studies, Washington DC?

Here are some useful tips:

You can add the following people as friends on the Community: Janna Anderson,… Continue

On August 18th, 2009, the first thematic workshop on Internet governance took place for Net-Aman, the Cyber Peace Initiative’s Youth Internet Safety Focus Group. The workshop was organized under the Empowerment Program of the CPI aiming at building the capacity of… Continue

Where are the ICT and internet experts/communities from the Pacific? The Pacific is unique with regards to the geographic, economic, political and social factors. Distance, accessibility, funding are some factors that prevent people from the Pacific participating at the IGF meetings. But the common factor is that Pacific countries are not aware of the IGF process....The Pacific countries are constantly evolving and they are being impacted by climate change and other changes at all levels -… Continue

In the concluding session of the EuroDIG the audience was asked to express 3 takeaway thoughts inspired by the two days of the meeting. Here are mine:

First, I firmly state as well the necessity of a more inclusiveness of the European IG debate, with a direct reference to a broader participation of East European stakeholders’ representatives. I was glad to hear the Diplo fellows rising up this issue in the last session and other speakers supporting it. Our active participation… Continue

I would like to express my gratitude to those Diplo alumni? stidents? who were so kind to fulfill their tasks thoroughly and who provided instant information on sessions, reporting everything which was going on during the discussions. That was a great and valuable job which is extremely helpful for lazybones like myself

Belated reflections on the second day

Takeaway from the Audience, Conclusions and Next Steps

EBU is very active in Europe and moving to the on demand media online, where you can see any media at any time. The differences between the traditional tv and this new form is bringing along a convergence. The principles of the EBU are the same as the EuroDIG but maybe different terms, but in fact are the same principles. The economic crisis has had an effect on the dessimination of information due to closures of media agencies.

Takeaways from the audience, conclusions and next steps

In the context of the financial crisis, many press offices are closed; but we need to ensure that citizens still have access to information and the Internet is a way of doing so.

A permanent secretariat for a European IGF is needed, as it will ensure the functioning of such a forum and the continuation of the activities began by EuroDIG.

There are countries that have applied the rules governing the audiovisual to the Internet environment.

One of EuroDIG goals… Continue

The key questions asked and answered during the fourth session of the day were weather there is need and desire for a European IGF, what its mandate and objectives should be, how its work should be organised.
Most contributors to the discussion agreed that a European IGF is more than necessary. It should take place prior to the Global IGF so that participants have the chance to formulate their messages and make a proper European contribution to the overall debate.

The post-JPA phase: towards a future Internet governance model

The question of ICANN’s potential independence from the US government opens up as the JPA review period approaches. EuroDIG panelists found that ICANN’s future and prospects of transformation of this organization, its structure and policy processes need to be adequately addressed as expressed in earlier demands by various IG stakeholders of WSIS and IGF meetings. Particularly, demands for increase of accountability and transparency within ICANN need to be met if ICANN’s future IG position is to… Continue

This was probably one of the most animated workshops throughout the two days of conference. Perceptions and opinions of online social media are very divergent. Some say it's a matter of personal choice if you want to become a member of an online networking site, others say it's not - it's also or mostly a social pressure. Apart from the 'networking role' that everybody agrees is an added value, my overall impression was that there was a tendency to vilify social networks. And maybe rightly so.… Continue

The mains issues covered by plenary session were: unrestricted access of users to online content, quality and legality of content, role and responsibility of gatekeepers and solutions to the existing problems. As a response to the first question -whether users have an unrestricted access to the online access, participants came up with other concerns. Therefore the first part of the workshop was mainly raising the main concerns rather then answering them.

One of the main concerns that… Continue

The discussions went down two main routes: access to networks and access to content. Possibly the first and the most strikingly positive impression was the fact that the session was finally an interactive one, as opposed to the ones in the previous day when it felt like you were assisting to a never ending monologue. I very much liked the moderator too who tried hard to have a balanced discussion despite his own bias, or that of Skype - and he succeeded in doing so.

The problems are… Continue

Plenary 4: Arrangements for a European IGF and Future EuroDIG Events

There was a discussion that we do not need not to fix issues that do not exist.
The provision of legislation is not required but there is a need for parliamentary focus that need to be;
Must be bottom up
Multi stakeholder approach
Must respect culture and inclusive
Reflect the concerns of Europe.

EuroDIG should always happen before the IGF. It will be a European theme and not a European Union theme.

CoE should be a Secretariat for… Continue

Plenary 4: Arrangements for a European IGF and Future EuroDIG events

We need to encourage national level IGF processes, following models in some other countries (USA, East Africa, West Africa). There are European values and principles that need to be translated into Internet governance terms. There is a need for a European model based on national model, bringing together all stakeholders from national and European levels.

European IGF must be bottom up, it must reflect diversity, it must follow the multistakeholder participation, reflect particular… Continue