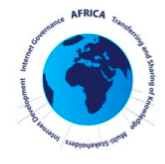 We, the participants at the West African Internet Governance Forum
held in La Palm Hotel, Accra (Ghana), from 14th to 16th October 2009,
organised by AfriNIC and the Government of Ghana,

Recalling that the Global Internet Forum has offered the possibility to
explore and test a new approach in addressing global issues related
to Internet development such as Access, Security, Critical Internet
Resources and Openness.

Recalling with satisfaction, that the United Stated Government (USG)
has ended its unilateral oversight of the Internet Corporation for
Assigned Names and Numbers (ICANN) and to take note of the new
Affirmation of commitment document issue by the two parties to make
ICANN independent with an important role to be played by the
Governmental Advisory Committee (GAC).

2. That West African countries should strive to create an environment
that favors a multi-stakeholder model dealing with critical issues that are
challenging the Internet development in the region.

various key players and stakeholders in their respective countries for ICT
development planning.

4. That Affordable Access should continue to be the priority for countries and
Regulators in order to improve Internet usage as a tool and enabler of
Socio-Economical development.

5. That affordable access starts from optimizing traffic flow paths and
Internetworking by encouraging local Interconnection through the setup of
Exchange Points and production of local content.

6. That Access and Security are key concerns for the region that must be
further discussed at a forum like IGF where different constituencies and
stakeholders can share their experiences and where African countries can
learn from and adapt to their local environment.

7. That the Global IGF has been a successful initiative as it has helped to
create an open environment where major issues have been discussed and
where the multi-stakeholder approach has been so far successfully
discussed. Hence support the renewal of the IGF mandate after the first five
years.

8. To organize a West African Internet Governance committee that is
reflective of the multi-stakeholder model to carry out the initiatives of WAIG
(as established in the WAIGF Concept Paper).

1. To actively participate at IGF to be held in Sharm El Sheikh;

2. To increase their participation in ICANN especially the governments with the
GAC so they can fully participate in the new oversight and evaluation
mechanism;

Comment by Henry Owera on October 26, 2009 at 2:26pm
"The NRUMAH Agenda". An iconic mnemonic. I attended the EAIGF 2009 and I am happy with the model. Thanks for sharing this with us.