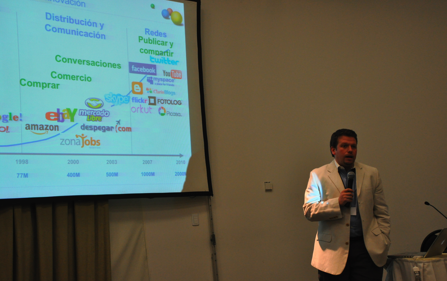 Pedro Less Andrade: Content regulations and freedom of expression n the Internet
The web 2.0 is maturing now as the use of the net goes to social web. From the Long Tail to user-generated content and now the communities... and also collective intelligence to democratization and collaboration.

There are 3 phases for convergence: in networks, in devices and finally in the consumer. The communication networks change the form of access. We can have adsl, blackberries, wifi... which bring us to devices: mobile phones, computers, television, videogames.

This is the framework for regulation. How should we have a legal reference for ICTs?

According to the international models, this should involve all stakeholders.

The digital plans of many countries like Argentina, Chile, Colombia started slowly this process, creating the base but there is still a lot to do.

Protecting the Internet ecossystem: the intermediaries are the necessary actors to allow users to access the Internet and its content. to be sure that this will continue a legal framework is necessary to assure more certainty for the providers.

The middlemen do not have control neither are responsible for generated content, transmitted, stored or published by users or referenced with the services provided, such as search engines.

The middlemen do not have editorial capacity over content and cannot be similar to the editor of a newspaper.

The middlemen do not find themselves in conditions to identify content illegal or alledgedly illegal or determine the damaging feature of such content. This is something that the legal divisions of government should do. It is the judges of law who should clarify whether content is legal or not,

Some of the authoritarian regimes or not democratic have tried to constrain the freedom of expression on the Internet with direct of indirect techniques. 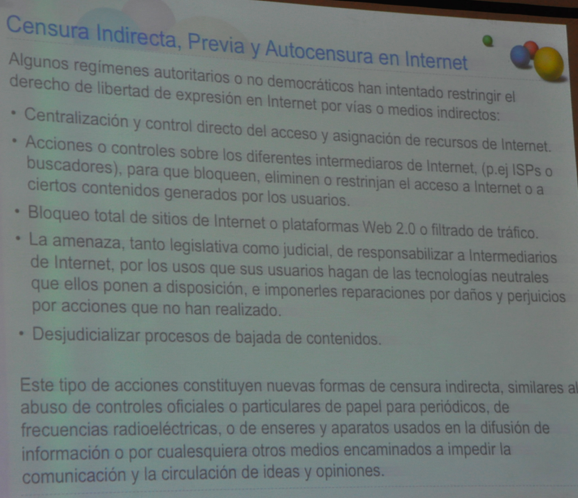 Censorship also happens when there are threats from letters of cease and desist or legal decisions. Intellectual property rights sometimes are also used to silence those who want to communicate.

There is a bill of law S-0209/09 in Argentina basically allowing indirect censorship. 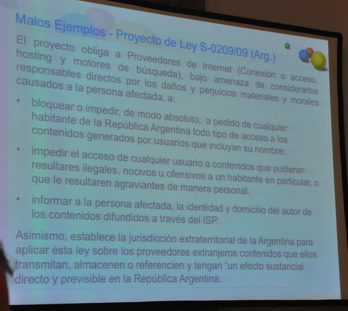 We should keep in mind that technologies are neutral, and the users are the ones who will shape the effects and forms of adoption. Copyright can have spill effects on freedom of expression

Digital Millennium Copyright Act: established the safe harbours. The private notice and takedown system estalished that the ISP would contact the user and if this one would not reply, then the content would be removed. This has worked with the secondary responsibility (contributory liability and vicarious liability from the US law which we do not have in Latin America).

With time, it was proved that many times the notice and takedown requests were not actually targeted to protect intellectual property bur rather to impose censorship. 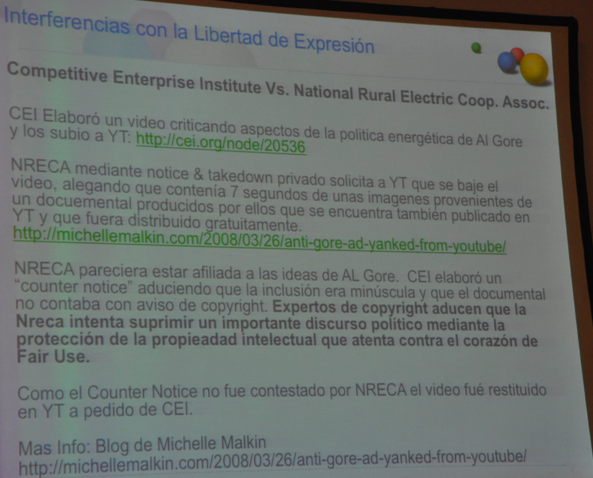 CEI created a video criticising Al Gore, and then NRECA used a notice and takedown to YouTube to remove the video claiming that it contiained some footage of images from their copyrighted material. NRECA seemed to be affiliated to Al Gore. CEI made a counter notice claiming that the use was minuscule (7 seconds) and that the original footage did not have a copyright indication.

The Chilling Effects http://www.chillingeffects.org is an important joint project of different institutions showing how online ctivities are being affected by the notice and takedown. There are obstacles to implement the notice and takedown in Latin America.

There is the exception for fair use: allowing the incidental and exceptional use of protected works with the objecitve to criticize, comment, teach or mock, with interests for academic research, as long as there is no economic exploitation of the work.

The judicial (not provate) take down establishes that the download system of protected content. Protects other institutes such as freedom of expression. Meanwhile, assures the immunity of Internet intermediaries.

Recommendations.
Education is essential. Users should understand that their freedom ends when it hurts others. And the parents and educators are important.

Collaboration. All stakeholders should collaborate with the legal system.

Legislation and public policy in a balanced way. The illegal acts should be punished, punishing the real responsible parties, with the solutions that are less restrictive to the Internet.

Use the platforms to educate.

A balanced legislation should: 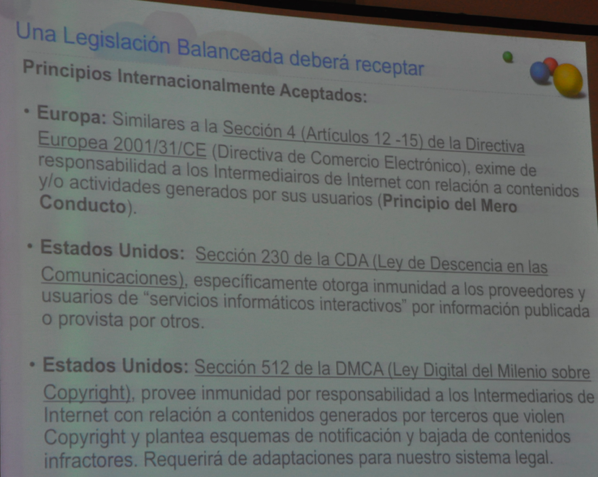 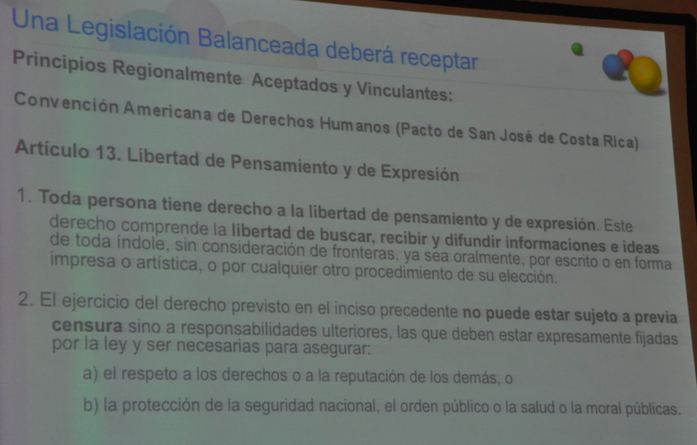 When imposing law to bad use of the Internet, it is necessary to take into onsideration the nature of these technologies, to avoid unnecessary obligations or excessive ones over the technological operators, so that actions are targeted to the real responsible parties, avoiding potential market distortions.