Is today the beginning of the end of Net Neutrality? 10:30 Important Vote.

Today, May 15, 2014 a vote will be taken at the FCC. Today the Internet we know can change forever. Today at 10:30 am EST the FCC meets to vote on the issue on whether or not allow the collection of special rates to provide certain services through the Internet for those who can afford it.  A "faster lane" has been called. Events can be followed live here: http://www.fcc.gov/events/open-commission-meeting-may-2014

Who will pay for the use of this improved infrastructure? According to the carrier companies it will will be pay by the service providers (eg NetFlix company that provides video service over the Internet).  They do not think that the user is going to pay for the "premium" service.  But obviously all higher costs for the service the carrier provides will be assumed by the NetFlix (or any company that hires the “premium service”) or will be transferred to the end user.

This complex transaction finally has a single objective: the carrier signal company, the "Telco" as it was formerly known, will get a bigger profit.  The "carriers" are already making millions due to monopoly or duopoly situation in which they are found in 80% of U.S. territory. Given that scenario there are only two ways to get the “high speed lanes”:

The problem will affect the whole world because companies like NetFlix, to continue with the previous example, have international operations.  The whole world will afford this DIGITAL ABYSS between those who can pay 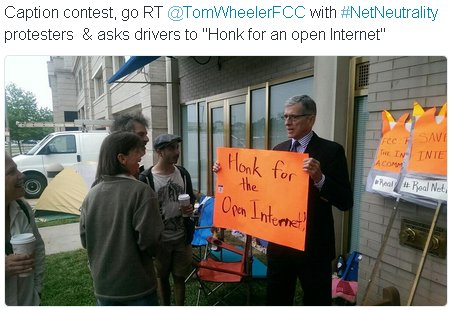 for a premium service and those who does not.  International servers,  since they are in the U.S., will go through the filter of the companies belonging to the "Tier 1" and therefore, although if you are located in a country with no specific filters, all that comes from the U.S. will be "accelerated" or will be passive of this artificial "slowness", oblivious to TCP / IP, which is placed with the sole aim of obtaining more profit.

The strange thing is that they are using resources that are intended for general public service: IP  numbers, DNS servers and the domains themselves.  The situation would have been different if a big company, such as NetFlix, decides to bring their video service at a rapid pace through the Intranet of a carrier… but here the intention is to use public IP numbers to create a PRIVATE SERVICE which only will be accessed by those who can afford it.

Does the today’s Digital Divide will become tomorrow’s DIGITAL ABYSS? In a few hours we will see. Due to the hour here in Lima Peru – 5:30 in the morning- we will repeat that old saying: good night and good luck Internet!