Today we interview Magaly Pazello (Diplo IGCBP 2008) who shares a ot of information about the Latin American and Caribbean regional meeting. 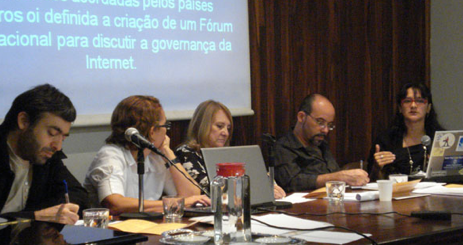 Magaly, there was a recent meeting in Rio on the LAC preparatory meeting for the IGF. Can you choose one specific issue that was discussed and share with us?

The event was very good. It gave us the opportunity to meet experts of Internet governance community, several stakeholders of the Latin American and Caribbean region, the Diplo colleagues, as well as friends that also work on related themes (IP, freedom of expression etc.) but not addressing to the same political arena -- it means IG is getting at least some attention of other activists in Brazil. However I have tried to find out information on the meeting by doing a Google search and nothing really significant appears... oh! oh!

The discussions around the "traditional" agenda of technical issues and its economic and social impact for the region bring together different views. I highlight the Demi Getchko (NIC.br) speech at the critical Internet resources panel. Detaching the economic interest of the big companies from the "merely" technical aspects, he criticized the term "critical" due the fact that these resources must be called "coordinated resources" instead of "critical resources". According him this change of language, also a change of concept, provide a better and clear idea about what these specific resources are and what is in the game... It can be a useful strategy to recover the political debate based on a different "key of understand".

Of course it is not the first time that the term "critical internet resources" is criticized, however it requires even more discussions about (not a surprise), discussions beyond the "gurus" and initiated people jargon. With clearly technical arguments, Getchko also destroyed the myth that ICANN has the power to eliminate a country of the "internet" by deleting this country from the root.

The Open Dialogue on Openness however has abridged IMO the most relevant concerns of civil society stakeholders/organizations. The methodology was the same applied in the IGF: the coordinators just put the theme on the table and give the floor for the audience. The major points raised by the people converged to the necessity to bring into the discussions a strong view of human rights. And despite the complains by the tech people about the exaggerated politicization of what is very technical, a deep understand of what is political in this process was highlighted. Then we go beyond the openness as interoperability, open standards, access to knowledge. A strong view of human rights is required to break the arguments based on binarism (open access X intelectual properties; bad people X good people).

In India an exercise was proposed: underline the intricate relations existing between privacy, security and openness dimensions and its tensions. I don't the results of this exercise, in Rio the idea for facing the complex scene was proposed in a inverse way: detaching the security and privacy dimensions of openness to explore in deep the latest bring into that other elements.

My point here, following the idea of a human rights strong view, was on how freedom of expression is undermined by the existent dispute about its definition as well as the claim of its application by one group to silence an other group, I mean when the freedom of expression principle is used to justify discriminatory speeches and behavior as well as to limit the access to knowledge. On the other hand, remember that in the IGF 2007 (Rio de Janeiro) there was a slot, parallel sessions, called "Freedom of Expression as a Security Issue"!

I am curious to read the final report on the Rio's session on openness.

What are you doing today and how this is connected to the IG process?

Currently I am doing a PhD in social sciences (very demanding...). The subject of my research is not directly connected to IG field, however the theoretical aspects of governance, democracy, freedom of expression and gender have a close relation to my previous work in the information society field what brought me to the IG process.

Besides, I have reconnected to the eLAC 2010 (http://www.eclac.org/socinfo/elac/default.asp?idioma=IN ) activities as member of the Working Group on Gender. This WG is planning to have 2 major meetings: one, probably this year, on ICTs and gender indicators; and the second one next year during the 11th Session of the Regional Conference on Women in Latin America and the Caribbean, to be held in Brazil, 13-16 July.

As independent consultant I am involved in a research on sexuality and internet in Brazil. This research is part of a research project called EroTICs (TICs means ICTs in Latin languages), conducted by the Women's Networking Support Programme-Association for Progressive Communications (APC-WNSP). EroTICs is directly connected to the Internet content regulation debate and aims to bring into that new voices as well as the feminist perspective about it. The research project also discuss freedom of expression, women rights and the right to communicate vis-à-vis local practices and contexts. For futher information on the EroTICs research project, please, see the website: http://www.apc.org/en/news/background-erotics-new-research-project-...

What projects do you have for the future? Which issues are you concerned with that people working on similar themes can contact you?

The next 2 years I will be completely dedicated to my PhD thesis research and academic related activities.

However I will continue involved in the eLAC 2010 Gender WG activities as well specific activities that aim to raise the knowledge of the Brazilian women grassroots organizations/community about information society issues in special freedom of expression as it is becoming a contentious issue in Brazil, particularly when religion and sexual rights are under the spotlight.

Given the increasing of pedophilia, child abuse and other sexual crimes visibility, the Brazilian Parliament is moving forward a range of new proposals for changing the national legislation, some of that address to the control of internet users, internet content, and in some way the proposals are discriminatory in terms of sexual rights.

In addition, in November 2008, Brazil has signed an agreement with Vatican what has shifted the debate in the Parliament creating an hostile environment to discuss themes that involves tolerance and freedom of thought. This agreement probably will impact negatively the developments for the National Communication Conference -- what is already very difficult given the fact that "communication" is one of the biggest "political coins" (trade-off) in Brazil.

The combination of freedom of expression, religion, culture and communication is not new. I would like to call the attention for the last developments at UN Human Rights Council around the declaration on combating defamation of religions made by Pakistan on behalf the OIC-Organisation of The Islamic Conference. As a hot theme the Pakistan's declaration was considered by experts incompatible with freedom of opinion and expression. Based on the Pakistan's proposal the UNHRC members have approved a Resolution (document # A/HRC/10/L.11), if I am not wrong in March 2009, that include items related to media and electronic media. The Resolution should be examined in detail given its complexity. It is interesting also in the context of Internet Governance new trends. At ICANN level, for example, there are religious groups mobilized to create a new TLD, I learned they are working actively on the understand of the procedures. It is interesting if we take into account the difficult to mobilize civil society for getting involved in the ICANN debates, working agenda etc. Also interesting because people think about internet as a secular "thing" and then religion appears...