Net 2.020 or Net 20.20? In 10 years from now, will we all be one click away from each other? What are the future services that can support increased…

PL 4: Policy and decision-making and multistakeholderism – international, national, and regional experiences. Is there a European vision?


“Multistakeholderism only works if the expectations are not too high” - is this valid when we talk about internet governance? The fourth plenary session @ EuroDIG set out to tackle the idea of shared responsibility for a common global… Continue

Moldova at EuroDIG 2010. “CHILDREN AND SOCIAL MEDIA – OPPORTUNITIES AND RISKS, RULES AND RESPONSIBILITIES”


The participants of the EuroDig session on child safety online started by discussing a study which shows that most parents think they know what their children are doing online,
but - in reality – they don’t. This, of
course, means that ensuring child safety on the Internet must include not only
preventing, but also educating and empowering children to seek advice when they
feel that they are abused, bullied…

When can we achieve global standards for the Internet? @EuroDig

The EuroDig session on global standards for the Internet and the working world started off with Eduardo Ustaran (Field Fisher Waterhouse) pointing out the following dilemmas:
how can we foster the development of the Internet in a way that safeguards the privacy of users?
And How can we take advantage of the technology available to us in a way that
protects individuals’ information and intellectual property?…

Report on WS6: Sovereignty of states and the role and obligations of governments in the global multistakeholder Internet environment

The idea that the concept of sovereignty in the age of Internet should change was put forth. The state is one of the three types of actors that exist. And consequently what was traditionally presented as being
the sovereignty of states should be replaced by the sovereignty of human beings
or of an Internet user at the end of the day. This is the only way in which we
will be able to succeed when it comes to formulating standards that will
correct the…

The first Plenary on the EuroDig 2010 was about Online content policies in Europe. Since its beginning I realized that it is going to be very interesting session. There were no key speakers panel, the speakers were among the audience. The moderators of the session wanted to make the audience more active. And they succeeded! The session started with the exposure of the Yahoo representative, who had been talking about the Yahoo liability concerning the online content and claimed that there is a… Continue

Who should be the real actors?

During first day of EuroDIG they were faced lots of different topics, but there's one commont point that I would like to underline.

In the morning session we talked about European IG processes, that can be quite different from a country to another.
France started to think about IG before its existence, while Italy has its national IGF meeting only in 2008. In Russia it was hard to introduce IG discussions, while in Portugal there often are extra meetings because there is an huge… Continue

Staunch supporters of copyright have today reiterated their call for a copyright framework, which they say has been ongoing for a decade. But taking into account recent legislative developments in Europe, things are indeed changing. 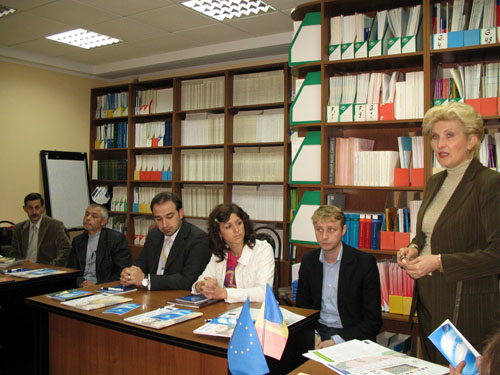 from national to global: were are the women?

three pannels. One to introduce and two for discussions. A lot of inputs, 24 speakers out of which 3 woman! The discussion is very qualitative but pretty gender neutral.

So there is still something unique to all the ideas, challenges, models we had been exposed to. We spoke about public and economic values, we spoke about national debate on internet governace. We spoke a lot about children and the internet world they are already living in but we pretend the issue of been male/female… Continue

Report - Round table - What is the public and economic value of the Internet for Europe?

Here is the short report of the first session on EuroDig 2010. It was 'Round table - What is the public and economic value of the Internet for Europe?’

The session was opened by its moderator Susana Rosa, who firstly introduced the key participants, or speakers, of the session and after introduction the key speakers, she briefly explained what are the main points
to be discussed during the session.

Seven participants of the European group of this year's IGCBP are currently attending the European Dialogue on Internet Governance (EuroDIG) meeting in Madrid, Spain. The meeting is spread over two days, and is an opportunity to bring European stakeholders together to discuss pressing IG issues.

I admire all our contemporary scientists living in 21st Century. Of all
the scientists, Stephen Hawking is the greatest though he is severely
disabled by motor neuron disease also known as amyotrophic lateral
sclerosis (or ALS). He is the greatest theoretical cosmologists of our
time.(Christian Science Monitor). After reading his "A Brief History of
Time", I started investigating the technology used to interpret his
thoughts. I came to understand about "PREDICTIVE… Continue

KATMANDU, Nepal - A South Korean mountaineer became the first woman
to scale the world's 14 highest mountains, crawling on all fours
Tuesday as she reached the last summit.
Oh Eun-sun, 44, arrived at the final, steep stretch of Annapurna in the
Himalayas 13 hours after she left the last camp to beat a Spanish rival
to the record. Her feat was broadcast live in South Korea by… Continue

Diplo Internet Governance Capacity Building Programme (IGCBP). Gao, please tell us a little about the current IG projects that you are involved with or have been engaged on recently.

Gao Mosweu: I have organised IPv6 Training, Linux for Women ICT Engineers, and I have done basic IG awareness lessons for my part time Ecommerce… Continue

Conducted by DiploFoundation In cooperation with FOSSFA

DiploFoundation is pleased to invite professionals from the ACP (Africa-Caribbean-Pacific) Group of States to register for a training workshop on Internet Governance issues (IG) and ICT policies, taking place during the pre-conference training programme of the Fourth African Conference on FOSS and the Digital Commons, IDLELO 4 from the… Continue

Here are some highlights from the classroom of Marsha Guthrie, tutor, Internet Governance Capacity Building Programme:

The Use of Wireless Links by Government
I believe that wireless network can benefit Government departments in many ways (cost control, extensibility, flexibility, public safety and emergency response). Technologies such as Wi-MAX, Wi-Fi mesh and Free Space Optics (FSO) are license exempt and… Continue