I come across with this news story that PLDT (Philipping Long Distance Telephone), the oldest telephone provider in the Philippines, will provide an ICT platform for Small and Medium Enterprises (SME) in the country for these enterprises to go national or global. It's a refreshing development in ICT here considering that PLDT had lorded it over for several years and it is only now that it has improved its services and now providing the small businesses ICT platform. please open the link… Continue

What Would Woody do?

If Woody Allen would be asked how to be more involved in the IGF process, I guess this would be his answer:

¨Eighty percent of success is showing up¨

One of the ways to do it is to be active in all possibilities offered.

The most important one now is filling the IGF Questionnaire - The DEADLINE is 31 January - if you do not want to be left out... Show… Continue

Diplo Expert Robert Guerra, our quintessential networker, just sent me an email which needs your immediate attention, so I will just copy his note to me:

As you know I lead an initiative on Internet Freedom here at Freedom House. After a long delay - we are almost set to launch our website. However, it's not quite ready. We need short term help to populate it with content before it launches Feb 1.

I thought that Diplo… Continue

Persuasion, the essence of Diplomacy

Just stumbled upon this: 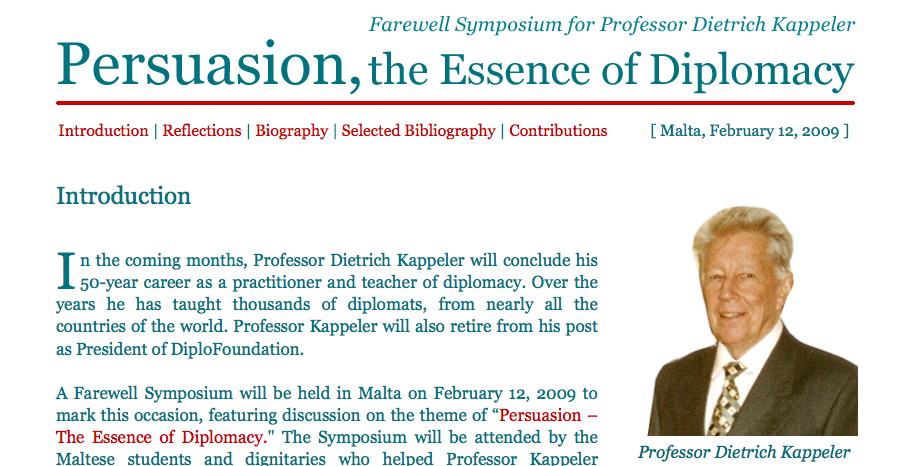 
In the coming months, Professor Dietrich Kappeler will conclude his 50-year career as a practitioner and teacher of diplomacy. Over the years he has taught thousands of diplomats, from nearly all the countries of the world. Professor Kappeler will also retire from his post as President of DiploFoundation.

A Farewell Symposium will be held in Malta on February 12, 2009 to mark… Continue

Over the weekend I came across an article on Koobface known to be a virus on facebook. The article illustrates how the virus is spread and shows to protect yourself against koobface. Read more ....... Thanks to Charity, She has already given her suggestions and thoughts on her experience in receiving such videos and links from other social networks. We… Continue

The Philippine government spent some 600 million pesos (US$13.6 million) in its 1st implementation of a computerized election during the last August 11, 2008 ARMM Election. This served as the test-pilot for the country's general elections in 2010. Despite minor technical glitches, irregularities existed that included vote buying, hauling of voters, authentication, double registrants, ghost voters, not using indelible ink, “coaching” whom to vote, the presence of Army and police officers inside… Continue

5 Reasons I Look Forward to Get Back to Brussels Tomorrow

Today is my last day of winter holiday spent back home, in Bucharest, Romania. Tomorrow I fly back to Brussels, back to the DG INFSO office at the European Commission where I’ve been working since September. And surprisingly I’m excited to get back and I look forward to it (surprisingly because I, for one, have always wished for weekends, holidays and such to last longer …).

That made me think some more about my work and my life in Brussels. Family and friends have asked me the whole… Continue

I am writing you to briefly inform you about opportunities for graduate studies in the field of media and communications policy at Central European University (CEU, http://www.ceu.hu/home). As you probably know, CEU is a unique graduate research university based in Budapest, Hungary. We have accreditation both in the United Sates and in Hungary, and the language of… Continue